Angelique Haugerud has served as editor-in-chief of two scholarly journals: American Ethnologist (2011-2015) and Africa Today (1996-1999). She has conducted extensive field research in East Africa and the United States and has received fellowships and grants from the National Science Foundation, Social Science Research Council, American Council of Learned Societies, American Philosophical Society, and Rockefeller Foundation. Her scholarship addresses the cultural politics of wealth inequality, satirical political activism, economic neoliberalism, critical development studies, land tenure, globalization, and social movements. She is the author of the book No Billionaire Left Behind: Satirical Activism in America (Stanford University Press, 2013); coeditor (with Marc Edelman) of The Anthropology of Development and Globalization: From Classical Political Economy to Contemporary Neoliberalism (Wiley Blackwell, 2005), coeditor (with M. Priscilla Stone and Peter D. Little) of Commodities and Globalization: Anthropological Perspectives (Rowman and Littlefield, 2000), author of The Culture of Politics in Modern Kenya (Cambridge University Press, 1995), and coproducer (with Joe Locarro) of a short documentary film, No Billionaire Left Behind (2013, available free on Vimeo). In addition to her scholarly articles, Haugerud has contributed pieces on political satire and wealth inequality to the Huffington Post and Stanford University Press blog, and she has been interviewed about both Kenyan politics and her U.S. scholarship on National Public Radio (New York City and Philadelphia). She has been elected to the executive boards of the Association for Political and Legal Anthropology, Society for Economic Anthropology, the American Anthropological Association’s General Anthropology Division, and the African Studies Association.

In addition to writing about contemporary U.S. political culture, Haugerud continues long-term research in Kenya, focusing on the cultural politics of wealth inequality as revealed in part through family histories, multi-generational patterns of economic mobility, the cultural economy and micropolitical economy of migrants’ urban lives and their return stays in rural locales, and in moral sentiments expressed among family and friends as well as in the public sphere. Multiple ethnographic research stays in Kenya after she completed her first book on that country afford her the unusual opportunity to monitor social change through repeated visits with the same families in a study that now spans town and countryside and that has become transnational and richly multi-generational. 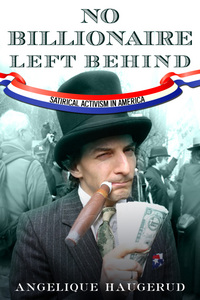 Growing economic inequality, corporate influence in politics, an eroding middle class. Many Americans leave it to politicians and the media to debate these topics in the public sphere. Yet other seemingly ordinary Americans have decided to enter the conversation of wealth in America by donning ball gowns, tiaras, tuxedos, and top hats and taking on the imagined roles of wealthy, powerful, and completely fictional characters. Why? In No Billionaire Left Behind, Angelique Haugerud, who embedded herself within the "Billionaires" and was granted the name "Ivana Itall," explores the inner workings of these faux billionaires and mines the depths of democracy's relationship to political humor, satire, and irony.

No Billionaire Left Behind is a compelling investigation into how satirical activists tackle two of the most contentious topics in contemporary American political culture: the increasingly profound division of wealth in America, and the role of big money in electoral politics. Anthropologist and author Angelique Haugerud deftly charts the evolution of a group named the Billionaires—a prominent network of satirists and activists who make a mockery of wealth in America—along with other satirical groups and figures to puzzle out their impact on politics and public opinion. In the spirit of popular programs like The Colbert Report and The Daily Show, the Billionaires demonstrate a sophisticated knowledge of economics and public affairs through the lens of satire and humor. Through participant observation, interviews, and archival research, Haugerud provides the first ethnographic study of the power and limitations of this evolving form of political organizing in this witty exploration of one group's efforts to raise hope and inspire action in America's current political climate.

Advance Reviews of No Billionaire Left Behind:

"In this pathbreaking book Angelique Haugerud presents a highly original account of novel forms of activism and engagement that seek to redefine the parameters of the political. It is difficult to imagine a more important or timely contribution to the comparative study of politics."—David Nugent, Emory University

"This brilliant study of the 'Billionaires for Bush' explains how and why irony has become such a powerful vehicle of political sincerity in the age of neoliberal monology. Whether or not one believes that satire is capable of reopening the terms of political discourse in the West by itself, we would all do well to heed Haugerud's persuasive argument that parody has potential to 'defamiliarize the familiar' by surfacing and inverting our conventions of understanding the world. Activists like the Billionaires have generated political effects, she shows us, by occupying the language of power."—Dominic Boyer, Rice University

"Angelique Haugerud's accessible and engaging book is important reading for anyone interested in the optimism of political satire, the hope that motivates activism, the clarity of critique, and the beauty of great ethnography. In No Billionaire Left Behind, Haugerud deftly combines economic anthropology, activism, performance, and the literature from news and journalism to build her powerful portrait of what The Billionaires are trying to accomplish and why."—Catherine Besteman, Colby College

American Anthropologist Review of No Billionaire Left Behind

"No Billionaire Left Behind is an absorbing and entertaining account of the rise of political satire in the United States....The ethnography connects the [satirical] Billionaires to earlier experiments in which activists used irony and parody to get their points across. It also examines the work of other activists who have creatively employed humor....To round out the analysis, Haugerud includes the voices of real billionaires....In 2006, she interviewed William Gates, Sr....[Her] methods allow Haugerud to develop a rich, fine-grained ethnography....In the concluding chapter, Haugerud provides a fascinating comparison between another 'unsettling' movement--Occupy Wall Street- and the [satirical] Billionaires. Haugerud relies upon theoretical perspectives from a range of disciplines.... The ethnography is theoretically sophisticated yet extraordinarily accessible. It will appeal to anyone interested in political or economic anthropology, social movements, or comparative political studies. Several books published in the wake of the financial crisis have documented how anthropology can illuminate urgent economic and political issues....Angelique Haugerud's excellent ethnography fits squarely within this growing body of critical and relevant work."  --Roberto J. Gonzalez, American Anthropologist

Publisher's Weekly review of No Billionaire Left Behind

"The activists profiled in Haugerud's lively study of political satire don tuxedos and furs for rallies and hold champagne flutes as protest props. Under fictive, ultra-rich personas like 'Alan Greenspend' and 'Robin Eublind', the Billionaires question 'the compatibility of wealth and democracy' through a polished form of 'political street theater' . . . Behind-the-scene details like prank-day jitters or the hours of improvisation and mannerism practice needed to get into 'billionaire shape' should charm fans of Stephen Colbert's satirical comedy, while grassroots organizations from any political bent will appreciate Haugerud's analysis of the efficacy of parody and image marketing. A danger of their theatrics is that details of the issues they champion can get lost among the irony-deficient. Nevertheless, Haugerud successfully illuminates America's staggering wealth inequality at the core of the Billionaire's message while investigating the comedic possibilities and limitations of their methods. "—Publisher's Weekly 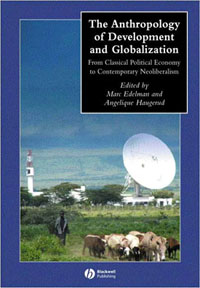 From the back cover of The Anthropology of Development and Globalization (Oxford: Blackwell Publishers, November 2004):

"Anthropology is nothing unless also concerned with contemporary social and political questions. Edelman and Haugerud's set of readings and wide-ranging, authoritative introduction will be indispensable to scholars and practitioners alike." --Ralph Grillo, University of Sussex

"Enhanced by the editors' knowledgeable introduction, which draws attention to anthropology's silences as well as engagements with classical and contemporary political economy, this comprehensive anthology will be of great value to scholars, students, and practitioners." --Sara Berry, Johns Hopkins University

Development - is it a powerful vision of a better life for the half of the world's population who subsist on two dollars a day? Or is it a failed Enlightenment legacy, an oppressive "master narrative"? Such questions inspire a field newly animated by theories of globalization, modernity, cultural hybridity, and transnationalism. The Anthropology of Development and Globalization is a collection of readings that provides an unprecedented overview of this field that ranges from its classical origins to today's debates about the "magic" of the free market.

The volume is framed by an encyclopedic introduction that will prove indispensable to students and experts alike. Subsequent readings range from classics by Weber and Marx and Engels to contemporary works on the politics of development knowledge, consumption, environment, gender, international NGO networks, the International Monetary Fund, campaigns t o reform the World Bank, the collapse of socialism, and the limits of "post-developmentalism." Explicitly designed for teaching, The Anthropology of Development and Globalization fills a crucial gap; no available text so richly mingles historical, cultural, political, and economic perspectives on development and globalization, and none captures such a wide variety of theoretical approaches and topics as does this exciting collection. 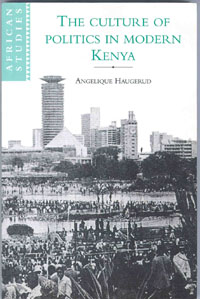 The Culture of Politics in Modern Kenya (Cambridge University Press, 1995).

From the back cover of The Culture of Politics in Modern Kenya:

"A model of clarity... Only rarely is anthropological knowledge as skillfully grounded in transdisciplinary theory."
--Joan Vincent, American Anthropologist

"Enormously stimulating...an innovative and important study of Kenyan politics combining anthropology, history and political economy to produce a suggestive and often orginal account of the relationship between state and society, high and deep politics, political culture and institutions, and the accumulation of wealth and poverty...This is a book that should stimulate discussion and further research in Kenya and elsewhere."
--Bruce Berman, Journal of African History 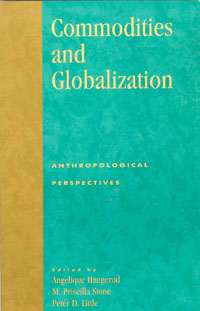 Commodities and Globalization explores topics such as how an object is transformed from curiosity or rare luxury to common necessity; the cultural categories and political and economic relationships embodied in commodities; and the effeLcts of global capital in agricultural commodity chains. This volume contributes to a globalization literature that had often been less attentive to the particular circumstances of the farmers, herders, popular musicians, artists, traders, and others whose activities power global flows.

2012 "Satire and Dissent in the Age of Billionaires." Social Research: An International Quarterly, vol. 79. no.1, spring 2012. Special Issue on Politics and Comedy. http://www.newschool.edu/cps/social-research/

2005 "'Leave No Billionaire Behind': Political Dissent as Performance Parody." Princeton Report on Knowledge, vol. 1, no. 1.
http://www.princeton.edu/prok/issues/1-1/inventions.xml